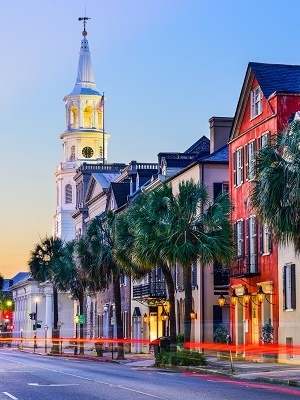 The Charleston Metro region’s tourism industry has grown significantly over the years and the region’s economic forecast for the next two years looks promising, according to the 2016-17 Outlook Forecast published by the Charleston Metro Chamber of Commerce.

Historically known for its military-based economy, the Charleston region has experienced a significant economic shift that includes an increased dependence on diverse activities of the Port of Charleston, a multi-billion dollar visitor industry, a booming health care industry and a growing manufacturing sector.

For the fifth consecutive year, Charleston was voted the top small city in the U.S. by Condé Nast Traveler’s annual Readers’ Choice survey.

“The number of visitors to the region annually increases an average of 150,000 to 200,000 people," Perrin Lawson, a Charleston Area Convention and Visitors Bureau Board Member, told the Palmetto Business Daily. "The focus has been on increasing the daily per person expenditure. The expectation is that modest growth in number of visitors combined with increased spending will result in sustained growth in economic impact.”

Lawson was on the Chamber’s Outlook Board and said the tourism metrics were based on revenue per available room (RevPAR) and attraction attendance, which are both subject to rise or fall depending on factors such as the economy and weather.

In 2015, average hotel occupancy increased significantly to 73.5 percent and the RevPAR was up 4.9 percent compared to the previous year.

RevPAR is a metric used to indicate the financial performance of a hotel property and is calculated by dividing a hotel's total guestroom revenue by the number of rooms and the number of days in the specific period being measured.

Record rainfall and flooding coupled with the closing of the Gibbs Museum for renovations caused a decrease in the total attendance at area attractions last year. But according to the report, attendance should increase modestly for the next two years.

With such growth seen in the region’s tourism industry, Lawson said the biggest challenge the Charleston region faces is that infrastructure needs to keep up with the transportation demand.

Also adding to the region’s appeal is the quality of life, history and culture that attract new residents young and old. Home sales in 2015 increase by 13.7 percent compared to 2014 — a trend that’s expected to continue in 2016 and 2017.

The growth in the region’s housing market and visitor industry caused a 5.3 percent growth in the retail sales in 2014, the report stated. However, retails sales are expected to remain flat in 2016 and moderately increase in 2017.

Employment in the Charleston region increased in 2015 by 2.8 percent, with the largest job gains seen in leisure and hospitality, followed by education and health care. Employment is expected to continue to grow over the next two years.

Want to get notified whenever we write about Charleston Metro Chamber of Commerce ?

Sign-up Next time we write about Charleston Metro Chamber of Commerce, we'll email you a link to the story. You may edit your settings or unsubscribe at any time.